According to 2015 CDC statistics, over 20 million Americans are affected by cataracts and half of the age 80 and up population has them. June has been deemed National Cataract Month, and as such is a good time to educate yourself on the what, whys, and hows of cataracts and an excellent time to get your eyes checked.

A cataract is a cloudy film that develops in the eye lens.  It causes slight or total obstruction of light passage.

Why do you get Cataracts?

Aging is the primary cause of cataracts. Those age 40 and older are usually affected by them.  Other causes include: being exposed to UV light and ionizing radiation over a long period of time, trauma to the eye, and chronic diseases such as diabetes and high blood pressure.

How do you Know if you Have Cataracts?

How do you Treat Cataracts?

In the early stages cataracts may be helped by getting new eyeglasses, brighter lighting, magnifying lenses, and anti-glare sunglasses.In the advanced stage surgery to replace the eye lens with an artificial lens is performed. 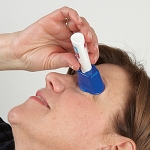